Go back to all blogs
Hamster outperforms Warren Buffett, Cathie Wood, and the S&P 500 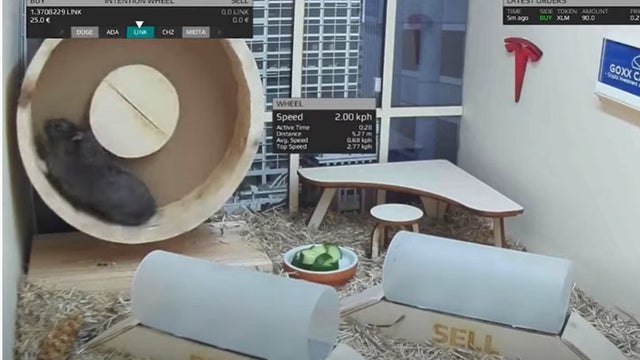 Mr. Goxx, a hamster, is a trader who has outperformed some of the industry's top names. On a Twitch channel, the rodent is broadcasts trading. According to crypto new site Protos, his roughly 20% profits since starting trading in June have beaten the S&P 500, Cathie Wood, and Warren Buffet's Berkshire Hathaway.

A Twitch stream begins when Mr. Goxx enters the so-called Goxx Capital office (a small box adjacent to his regular cage). His Twitter and Reddit accounts receive an alert, notifying his followers. Even if he leaves right away or sits quietly, inspiration can come at any time.

Mr. Goxx's office is equipped with a wheel and two tunnels, allowing him to do business. The wheel, appropriately titled the wheel of intention, spins through roughly 30 cryptocurrencies, one of which is "chosen" once he exits.

When Mr. Goxx steps away from the wheel, he has the option of passing through one of his office's two tunnels. The one on the left is branded "purchase," while the one on the right is labeled "sell." Depending on which tunnel he passes through, an automatic purchase or sell order is placed on an internet crypto exchange using real money.

Despite Mr. Goxx's recent success, his owner, a 30-year-old German lecturer and prototyping specialist told the BBC that the idea began as a hobby during the pandemic. Since college, the owner, who preferred anonymity, had put together the pet rodent's set up with his best friend.

According to the pair, Mr. Goxx's streams are intended for entertainment only and not as financial advice. Mr. Goxx is not a certified or licensed trader, according to a little box at the bottom of each stream.